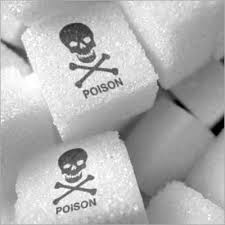 SUGAR: HARMFUL TO HUMANS AND ANIMALS

Shipwrecked sailors who ate and drank nothing but sugar and rum for nine days surely went through some of this trauma; the tales they had to tell created a big public relations problem for the sugar pushers. This incident occurred when a vessel carrying a cargo of sugar was shipwrecked in 1793. The five surviving sailors were finally rescued after being marooned for nine days. They were in a wasted condition due to starvation, having consumed nothing but sugar and rum. The eminent French physiologist F. Magendie was inspired by that incident to conduct a series of experiments with animals, the results of which he published in 1816. In the experiments, he fed dogs a diet of sugar or olive oil and water. All the dogs wasted and died.3

The shipwrecked sailors and the French physiologist’s experimental dogs proved the same point. As a steady diet, sugar is worse than nothing. Plain water can keep you alive for quite some time. Sugar and water can kill you. Humans [and animals] are “unable to subsist on a diet of sugar”.4 The dead dogs in Professor Magendie’s laboratory alerted the sugar industry to the hazards of free scientific inquiry. From that day to this, the sugar industry has invested millions of dollars in behind-the-scenes, subsidized science. The best scientific names that money could buy have been hired, in the hope that they could one day come up with something at least pseudoscientific in the way of glad tidings about sugar.

It has been proved, however, that (1) sugar is a major factor in dental decay; (2) sugar in a person’s diet does cause overweight; (3) removal of sugar from diets has cured symptoms of crippling, worldwide diseases such as diabetes, cancer and heart illnesses. Sir Frederick Banting, the codiscoverer of insulin, noticed in 1929 in Panama that, among sugar plantation owners who ate large amounts of their refined stuff, diabetes was common. Among native cane-cutters, who only got to chew the raw cane, he saw no diabetes. However, the story of the public relations attempts on the part of the sugar manufacturers began in Britain in 1808 when the Committee of West India reported to the House of Commons that a prize of twenty-five guineas had been offered to anyone who could come up with the most “satisfactory” experiments to prove that unrefined sugar was good for feeding and fattening oxen, cows, hogs and sheep.5

Food for animals is often seasonal, always expensive. Sugar, by then, was dirt cheap. People weren’t eating it fast enough. Naturally, the attempt to feed livestock with sugar and molasses in England in 1808 was a disaster. When the Committee on West India made its fourth report to the House of Commons, one Member of Parliament, John Curwin, reported that he had tried to feed sugar and molasses to calves without success. He suggested that perhaps someone should try again by sneaking sugar and molasses into skimmed milk. Had anything come of that, you can be sure the West Indian sugar merchants would have spread the news around the world. After this singular lack of success in pushing sugar in cow pastures, the West Indian sugar merchants gave up.

With undaunted zeal for increasing the market demand for the most important agricultural product of the West Indies, the Committee of West India was reduced to a tactic that has served the sugar pushers for almost 200 years: irrelevant and transparently silly testimonials from faraway, inaccessible people with some kind of “scientific” credentials. While preparing his epochal volume, A History of Nutrition, published in 1957, Professor E. V. McCollum (Johns Hopkins university), sometimes called America’s foremost nutritionist and certainly a pioneer in the field, reviewed approximately 200,000 published scientific papers, recording experiments with food, their properties, their utilization and their effects on animals and men. The material covered the period from the mid-18th century to 1940. From this great repository of scientific inquiry, McCollum selected those experiments which he regarded as significant “to relate the story of progress in discovering human error in this segment of science [of nutrition]”.

Professor McCollum failed to record a single controlled scientific experiment with sugar between 1816 and 1940. unhappily, we must remind ourselves that scientists today, and always, accomplish little without a sponsor. The protocols of modern science have compounded the costs of scientific inquiry. We have no right to be surprised when we read the introduction to McCollum’s A History of Nutrition and find that “The author and publishers are indebted to The Nutrition Foundation, Inc., for a grant provided to meet a portion of the cost of publication of this book”. What, you might ask, is The Nutrition Foundation, Inc.? The author and the publishers don’t tell you. It happens to be a front organization for the leading sugar-pushing conglomerates in the food business, including the American Sugar Refining Company, Coca-Cola, Pepsi-Cola, Curtis Candy Co., General Foods, General Mills, Nestlé Co., Pet Milk Co. and Sunshine Biscuits-about 45 such companies in all. Perhaps the most significant thing about McCollum’s 1957 history was what he left out: a monumental earlier work described by an eminent Harvard professor as “one of those epochal pieces of research which makes every other investigator desirous of kicking himself because he never thought of doing the same thing”.

In the 1930s, a research dentist from Cleveland, Ohio, Dr. Weston A. Price, traveled all over the world-from the lands of the Eskimos to the South Sea Islands, from Africa to New Zealand. His Nutrition and Physical Degeneration: A Comparison of Primitive and Modern Diets and Their Effects,6 which is illustrated with hundreds of photographs, was first published in 1939. Dr. Price took the whole world as his laboratory. His devastating conclusion, recorded in horrifying detail in area after area, was simple. People who live under so-called backward primitive conditions had excellent teeth and wonderful general health. They ate natural, unrefined food from their own locale. As soon as refined, sugared foods were imported as a result of contact with “civilization,” physical degeneration began in a way that was definitely observable within a single generation. Any credibility the sugar pushers have is based on our ignorance of works like that of Dr. Price.

Sugar manufacturers keep trying, hoping and contributing generous research grants to colleges and universities; but the research laboratories never come up with anything solid the manufacturers can use. Invariably, the research results are bad news. “Let us go to the ignorant savage, consider his way of eating and be wise,” Harvard professor Ernest Hooten said in Apes, Men, and Morons.7 “Let us cease pretending that toothbrushes and toothpaste are any more important than shoe brushes and shoe polish. It is store food that has given us store teeth.” When the researchers bite the hands that feed them, and the news gets out, it’s embarrassing all around. In 1958, Time magazine reported that a Harvard biochemist and his assistants had worked with myriads of mice for more than ten years, bankrolled by the Sugar Research Foundation, Inc. to the tune of $57,000, to find out how sugar causes dental cavities and how to prevent this. It took them ten years to discover that there was no way to prevent sugar causing dental decay. When the researchers reported their findings in the Dental Association Journal, their source of money dried up. The Sugar Research Foundation withdrew its support. The more that the scientists disappointed them, the more the sugar pushers had to rely on the ad men.

Next: Sucrose, Pure Energy At A Price

This article is extracted and edited from the book, Sugar Blues, © 1975 by William Dufty. The book was first published by the Chilton Book Company, Padnor, PA, USA. Warner Books, Inc., NY, published an edition in 1976 and reissued it in April 1993.

iThere are no comments